The Extension of Barcelona - Cerdà’s Initial Plan of 1856

The first plan for the extension of Barcelona came from a Catalan civil engineer, Illdefons Cerdà.  Cerdà’s plan was revolutionary for its time, as it focused on planning for hygiene and ease of mobility and transportation in a grid like structure.  To increase hygiene, Cerdà drew from 19th century hygienist theories and planned the city blocks of the extension to be 113.3 by 113.3 m2 in order to optimize the living standards by allowing a 6 m2 volume of air per person.  To increase mobility and transportation, Cerdà planned for each corner of a block to be cut in a chamfer, or rounded, planned very large street widths of 35 m, and included big avenues from 50 to 80 m wide at the main ports and gates of the city. [1] The streets were divided into two parts, one for vehicles and one for pedestrians.  In addition to hygiene and transportation, Cerdà focused on increasing the green spaces and gardens in every block of the city, almost like compact garden-city model. [2]  The main goal of Cerdà’s plan was to allow goods and raw materials to be easily transported around the city, a necessity for an industrializing city.

In addition to the planning for the layout of the extension, Cerdà also included an economic plan and the bylaws necessary for his plan to be implemented.  The construction of Cerdà’s wide streets involved the use of many expropriations and compensation to be paid for the expropriations.  Cerdà suggested the urbanization and building process of the Extension should be handed over to a large private enterprise to manage this expropriation.  Cerdà also included very strict bylaws in order to ensure his living standards were being met.  Buildings had to use less than 50% of the block’s surface, and could only use two of the block to allow space for gardens. There was a 20 m height limit as well as a 15 to 20 m depth limit. [2] 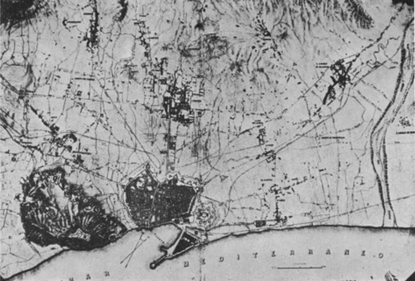 Cerdà’s plan faced strong opposition particularly from architects and conservative parties.  The architects first criticized Cerdà’s grid-like structure as monotonous and lacking creativity.  The architects, most notably Antonio Rovira, wanted to develop the extension in a concentric way in order to promote class separation.  Rovira’s plan focused on a hierarchical extension from the axis of the Passeig de Gràcia, already used by upper class and Catalan bourgeoisie. [2] Cerdà’s plan was also criticized for its large use of expropriations for the wide streets.  Rovira’s plan only used 10 to 15 m streets, therefore reducing the number of expropriations.  The Barcelona city council also opposed the use of a private enterprise to manage the expropriations as they feared the project would grow out of their control. [1]

The final criticism focused on Cerdà’s use of the old city from before the walls were demolished.  Cerdà considered the extension as a foundation of a new Barcelona, and included plans to develop a new city center, the Plaça de les Glories Catalanes (clearly defined in the 1859 plan at the intersection of the major avenues), whereas Rovira planned to continue urbanization in a radial extension from the old city.  Old city property owners feared that Cerdà’s plan would devalue their property and cost too much in expropriations, therefore they favored Rovira’s plan. [2] 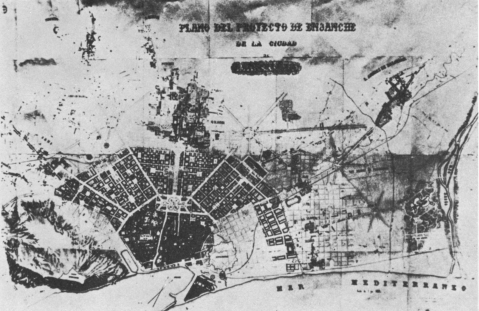 Cerdà modified his plan to address these criticisms, and unveiled the new plan in 1859.  In this plan, he reduced the width of the street size to 20 to 30 m, abandoned the plan to have special housing facilities for workers, extended the depth of buildings to 20 m, and made the regular distribution of parks and public facilities non mandatory.  As a result, the Royal Decree of 1860 approved Cerdà’s layout of the city, however it did not approve his vital economic plan or building bylaws. [2]

The actual construction of buildings took place at a slow rate. In the first twenty years after the approval of the plan, only 100 hectares were built.  It took almost fifty years for just one of Cerdà’s main avenues to be built. [2]

The implementation of Cerdà’s plan suffered from a lack of regulation. Most notably, a hierarchal structure was imposed on his grid layout: the zone around the Passeig de Gràcia, originally planned to be the center of Rovira’s plan, became an upper class location.  Land values and housing prices varied based on their proximity to this location.  As a result, the right side of the extension, the land close to the Passeig de Gràcia, developed more quickly and with higher quality than the left side of the extension.  In addition to this, blocks dedicated for parks, gardens, markets, schools, and social centers were ignored and used for housing, industry and commercial buildings instead. [5]

One of the main achievements of Cerdà’s plan was the construction of one of the three big avenues, the Via Laietana, to connect the port and the gates of the city.  Controversy surrounded the construction of the Via Laietana because it divided one of the most densely populated areas of the old city, and it opened up the street widths to reduce potential blockading in strikes; however the construction was finished in 1926. [1] Although Cerdà’s plan did not reach his intended level of completion, evidence of his plan can be seen today in Barcelona through the existence of the numerous trees along the sidewalks, the chamfers at each end of the building blocks, and the wide streets. [1] 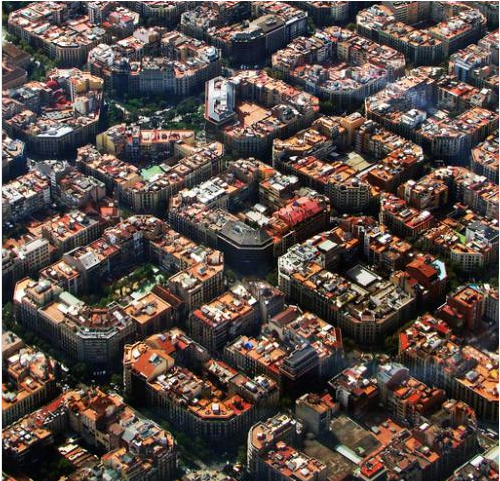